MODA assisted in a citywide response effort after an outbreak of Legionnaires' Disease.

On July 17, 2015, the Bureau of Communicable Disease of the New York City (NYC) Department of Health and Mental Hygiene (DOHMH) detected an abnormal number and distribution of Legionnaires’ disease (LD) cases in the South Bronx.1–3 This cluster of cases would eventually grow into the largest outbreak of LD in NYC history. The NYC DOHMH led the outbreak response, part of which included sampling numerous cooling towers within NYC for Legionella pneumophila bacteria. In the aftermath of the outbreak, NYC became the first large jurisdiction in the United States to take a regulatory approach to the management of cooling towers to prevent Legionella contamination.

-from The 2015 New York City Legionnaires’ Disease Outbreak: A Case Study on a History-Making Outbreak

In August 2015 DOHMH Commissioner Dr. Mary Bassett issued a Commissioner’s Order mandating the inspection and disinfection of all rooftop cooling towers (a type of HVAC system) that had not already been disinfected within the past 30 days. Local Law 77 was introduced shortly thereafter, which required all cooling towers in New York City to be registered with the Department of Buildings (DOB) and be inspected every 90 days. A citywide response effort aimed to identify all cooling towers and ensure compliance with the Commissioner’s Order as quickly as possible.

What is the analytics question?

Identifying and tracking cooling towers quickly became a major challenge, especially because there was no existing record-keeping or data management infrastructure for cooling towers. The citywide response pursued multiple outreach channels, including:

Each outreach effort produced data which were difficult to reconcile and interpret. MODA was tasked with producing a single, reliable source of ‘ground truth’ that reflected the entirety of what was known and could aid in decision-making and further response.

What data is required?

Because outreach efforts were happening in real time it became very important to clean, integrate and reconcile possibly contradictory data sources in a standardized way. Because addresses and buildings were reported in different ways by each source, all newly created records first had to be geocoded to a unique building using the Department of City Planning’s (DCP) geocoding application, Geosupport. This way, MODA was able to produce a record of cooling towers unique to the level of individual buildings on a daily basis. MODA then combined this situational dataset with existing static location data such as PLUTO in order to create both a common source of situational awareness across the city and a basis for in-depth analysis. 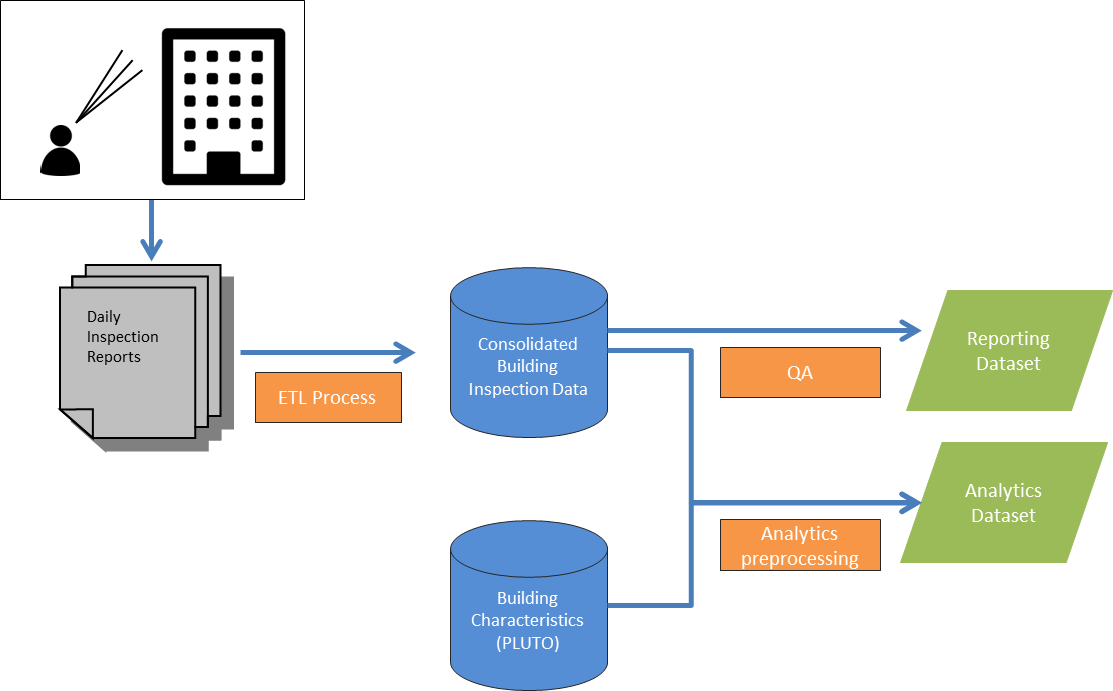 What data analysis is applicable?

Initial analysis focused on measuring progress towards the goal of identifying and ensuring the cleaning of every known cooling tower as quickly as possible. MODA created reporting dashboards - updated daily - which provided the latest status of every already identified cooling tower as well as tracking the progress towards completing inspections for all eligible buildings.

As the operation progressed enough data was collected to begin proactive analysis. MODA used the consolidated dataset of cooling towers already located by the city to identify what types of building and location features could indicate the presence of a cooling tower at other locations. Both descriptive statistics and predictive modeling were used to provide more insight for the citywide response.

Even simple exploratory analysis can be an excellent way to validate assumptions and uncover the unexpected. New York City is incredibly dense and it would be perfectly reasonable to think of skyscrapers as the likeliest location for commercial cooling towers. The heatmap below tests this assumption by showing what types of buildings had the most cooling towers present. As expected, clusters of tall Office Buildings (Class O), Elevator Apartments (D) and Condominums (R) are darkest on the heatmap. However there were some less intuitive locations as well, such as the relatively high number of 1-2 story store buildings (class K). These could be grocery stores or big box retailers. 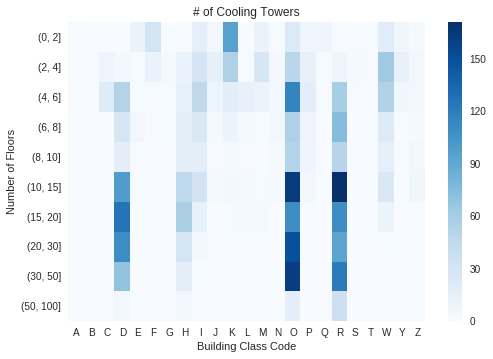 The full code for analysis and models is embedded below

How can the analysis improve the operation?

Outreach teams in the field would report findings at the end of each day and subsequently MODA updated common source dataset overnight to ensure the most accurate possible reporting for the next day’s outreach operations. The newest revised data became the basis for providing field teams direction to buildings that still had not been verified as complying with the law.

All work was validated and updated daily as new data were received from both the public and city outreach teams in the field. Updating and improving reporting and analysis was a consistent iterative process that improved as more complete and reliable data became available over time.

Is the model sustainable?

After several weeks of around-the-clock citywide response the active response operation including field inspections were wound down. Building owner registration and compliance verification continued through DOB as a regular process. MODA handed continuing routinized reporting over to DOITT for automation.